Portpatrick, on the west coast of Scotland, was once the closest crossing to Donaghadee in Northern Ireland. But the storms that whipped through the North Channel destroyed the crossing so many times that it moved to nearby Stranraer. Villagers were keen to maintain the harbour for pleasure sailors who might spend their evenings – and their money – in the town’s restaurants and pubs. In 2012, a local trust paid £350,000 to bring the harbour into community ownership. It was later valued at just £75,000.

In the scramble to pay considerable debts to the harbour’s previous private owners, Calum Currie, a local oil technician, landed on the idea of selling community shares in the harbour and becoming Scotland’s first community benefit society. In 2015, 554 shareholders from as far away as Canada and Bermuda invested in Portpatrick harbour, raising £100,000. Since, the Portpatrick Harbour community benefit society has secured an extra piece of land from Dumfries and Galloway council for £1, and built a new toilet and shower block for visitors.

Under the Community Empowerment Act (Scotland) 2015, community groups like Portpatrick Harbour community benefit society can take control of local facilities. The society also qualifies for financial relief to run the facilities through several exemption schemes backed by the government. Thanks to these subsidies, Portpatrick Harbour has now employed two local people to maintain its facilities.

“This employment goes some way to initiating the contribution towards the impact on the social and financial wellbeing within the community that the society wishes to impart,” Currie told Portpatrick shareholders in a newsletter in May 2019.

In April 2019, the society secured European funding to restore several buildings on the harbour, to include a washing and drying facility, a workspace and a new harbour office. 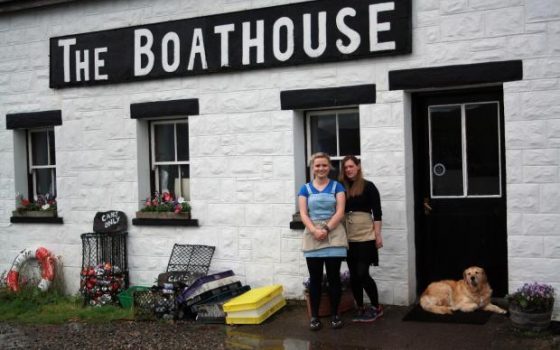